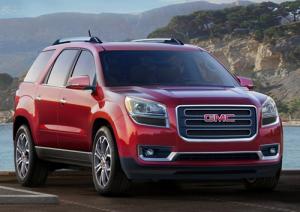 Christmas is almost here and time is running out on 2013. End-of-year car clearances are going strong and this is a great month for dealer incentives to entice people shopping for new cars to finally pull the trigger and make a purchase. This has been a great year for several manufacturers and they are anxious to take advantage of these last few weeks to end the year strong.

2014 GMC Acadia – SUV shoppers will be pleased to find 0% financing for up to five years or $1,500 consumer cash from GMC. This deal also runs through January 2.

2013 Chevrolet Corvette – Chevy is pushing the 2013 model with a $2,000 cash allowance or 1.9% financing for up to 60 months. With the highly anticipated 2014 models rolling in dealers should be happy to make deals on this past year’s model.

2014 Toyota Camry – Toyota has regional incentive available this month so you’ll need to check with a local dealer for exact details. Most areas have up to $1,000 cash-back available or 0% financing for 60 months plus finance cash.

This is only a sampling of the deals available this month and as we get closer to the end of the year dealers will get even more aggressive to meet year-end goals and move inventory. CarClearance.com can help you get dealer quotes, and even find financing for your next car so you can start the New Year in a new car.