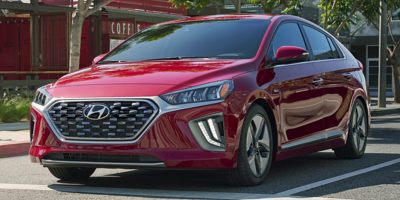 The Hybrid model achieves its impressive fuel economy through an advanced drivetrain that pairs a 43-horsepower electric motor to a 1.6L 4-cylinder conventional gasoline engine. Combined, they make 139 horsepower, which is then sent to the front wheels through a 6-speed Ecoshift transmission. While most other hybrids use a continuously variable transmission for maximum efficiency, Hyundai hits their mileage target and delivers a more conventional driving feel by employing a sports-car style dual-clutch "automated" manual.

The Plug-in Hybrid also utilizes the same powertrain as the Hybrid model, which again uses a 1.6L gasoline engine, but supplements it with a more powerful electric motor. Range on the plug-in hybrid will be around 29 miles, after which the gasoline engine kicks in to recharge the batteries.

Lastly, in select markets, the Ioniq Electric is available. It is powered by a 134-horsepower electric motor exclusively, and features a maximum range of about 170 miles, which should be more than enough for most commutes.

The Hyundai Ioniq returns for 2020 with quite a few changes under the skin to make it easier to live with. The interior has been given a redesign, with a bigger 8-inch screen replacing the old 7-inch unit. The interior redesign also includes new ambient lighting, while housing the controls for some of the new tech that's made its way into the Ioniq. Hyundai's excellent Smart Cruise Control system has been added to several trims, meaning the car will speed up, slow down and even stop to keep pace with traffic. In addition, the systems can also be utilized to help steer the car with its capable lane keep assist system.

Mechanically, the electric version of the Ioniq gets quite a few enhancements to its drivetrain. The most obvious one is a bump in range. While 124 miles was good enough for most commuters, the Ioniq electric can now go 170 miles, thanks to a bigger battery pack. More good news though comes in the form of both faster charging (less than an hour to reach 80 percent) as well as a bit more horsepower, 134 up from 118.

The 2020 Hyundai Ioniq has quickly become a top competitor in the hybrid and electric vehicle market. Taking aim at the Toyota Prius, Hyundai looks to end that domination with their sleek looking Ioniq, which is available as a conventional hybrid, a plug-in hybrid and a fully electric vehicle. Offering a lot of car and a lot of technology at a starting price just over $23,000 has been a strategy that Hyundai is betting will work for the Ioniq. Add that with a 10-year/100,000-mile powertrain warranty and lifetime battery coverage, the Ioniq truly stands out among competitors.