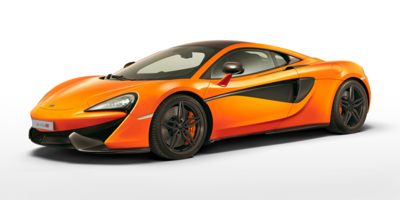 McLaren offers the 570S in two body types: Coupe and Spider convertible. At the heart of the 570S is the same twin-turbocharged 3.8L V8 that powers most of their cars. Its mounted mid-ship and makes 562 horsepower. Power is sent to the rear wheels via a twin-clutch 7-speed automatic. McLaren claims 0-60 mph in 3.1 seconds, although in independent tests, the 570S has been clocked 60 mph in under 3 seconds, an amazing feat for a car that is rear-wheel drive. Top speed is claimed to be 204 mph.

Much of the 570S' over-the-top performance can be attributed to the McLaren's light weight. While the 570S' rivals all feature all-wheel drive, McLaren makes-due with power being sent only to the rear wheels. This makes for better driver feedback, more entertaining handling characteristics and a much lighter chassis. While the 911 Turbo S and the Audi R8 both weigh over 3500 lbs, the McLaren 570S weighs under 3300 lbs. Lightness benefits everything in a sports car, acceleration is quicker, handling is sharper and even fuel economy is improved.

One trim level does not mean a paucity of options. Like many other expensive cars, the McLaren 570S can be dressed up and customized with a dizzying array of add on parts, carbon fiber trims and spectacular looking wheels. Colors run the gamut from tasteful and restrained to bright and eye catching, as such the "Mantis Green" paint option.

While the standard stereo system features four speakers, an optional Bower and Wilkins stereo features 12-speakers and 1280 watts. A final option all potential buyers should be aware of is the "nose lift" feature. McLaren may call it a sports car, but anyone looking at the 570s will think it's a supercar, thanks to its exotic styling and low stance. The nose lift option gives drivers the ability to raise the front of the car by 40mm with the push of a button, which helps to clear speed bumps, driveways, or just general crummy roads. The nose then returns to its natural position when travelling above 37 mph.

McLaren has an obsessive attention to detail and exacting standards for all their cars that involve massive levels of performance. However, the entry-level 570S is one step down from the 650S. The 570S competes with the Porsche 911 Turbo S and the Audi R8 V10. With its base price, the 570S is perfectly poised to take on its rivals, offering a car that is far more exotic, while being every bit as fast around a racetrack.

Sorry there are no rebates or incentives currently available.